Does Avast VPN Work with Netflix in 2022

If you are here looking for the answer to whether Avast VPN works with Netflix, you are in the right place. Avast VPN certainly does work with Netflix, unlocking the streaming service in three regions: the US, UK, and Australia. However, it’s not the most reliable Netflix VPN and definitely not the strongest in performance. If you want a problem-free VPN for Netflix, we recommend checking out our best Netflix VPN guide.

We’re assuming you’re interested in the US version of Netflix and how you can watch your favourite American Netflix shows and movies using Avast VPN. After all, the United States has got the largest catalogue of Netflix titles. It features some absolutely mouth-watering exclusives that can be enjoyed solo or with family and friends. But do you know which country has got the best Netflix library? Stay tuned, for we’ll be revealing the region with the highest-rated Netflix shows and movies in this very article.

How to watch Netflix with Avast VPN 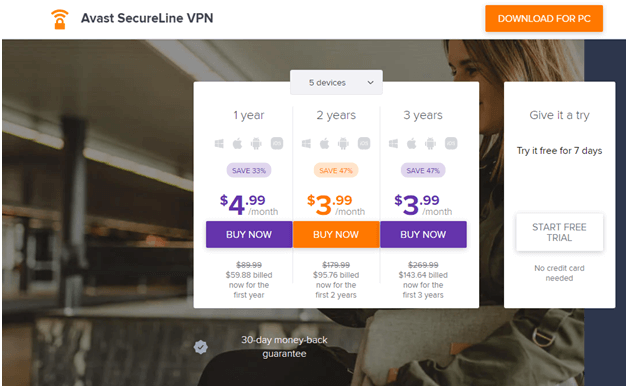 2) Download and install the Avast VPN app on your desktop or mobile. 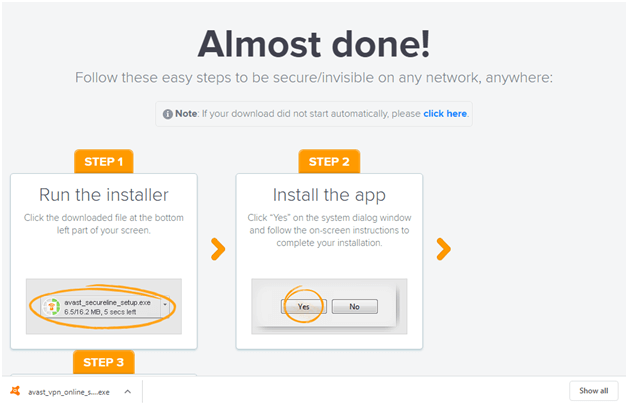 3) Open the app and enter your Avast VPN license key. 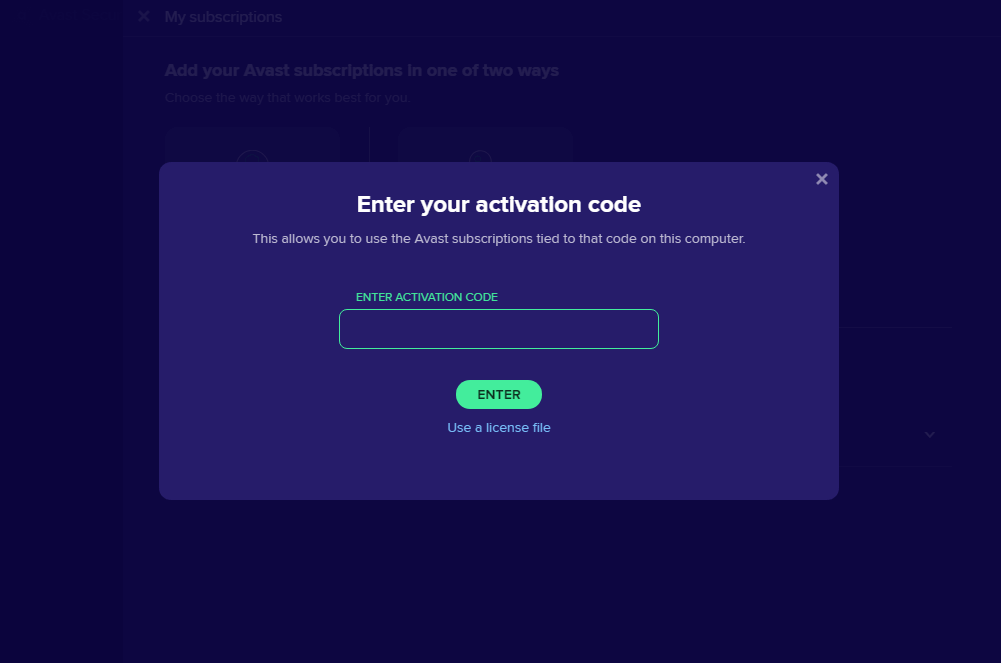 4) Click Change location and select a US server from the streaming tab. If you’re connecting from Australia, the New York server works best. 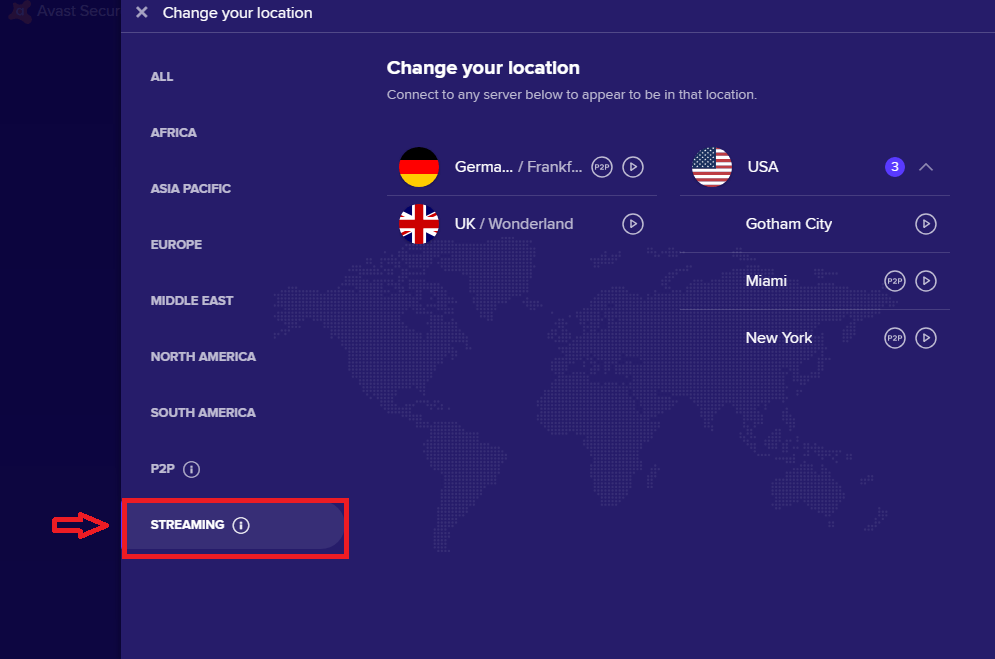 5) Head over to Netflix USA and sign in by typing your username and password. You can use your existing Netflix membership. 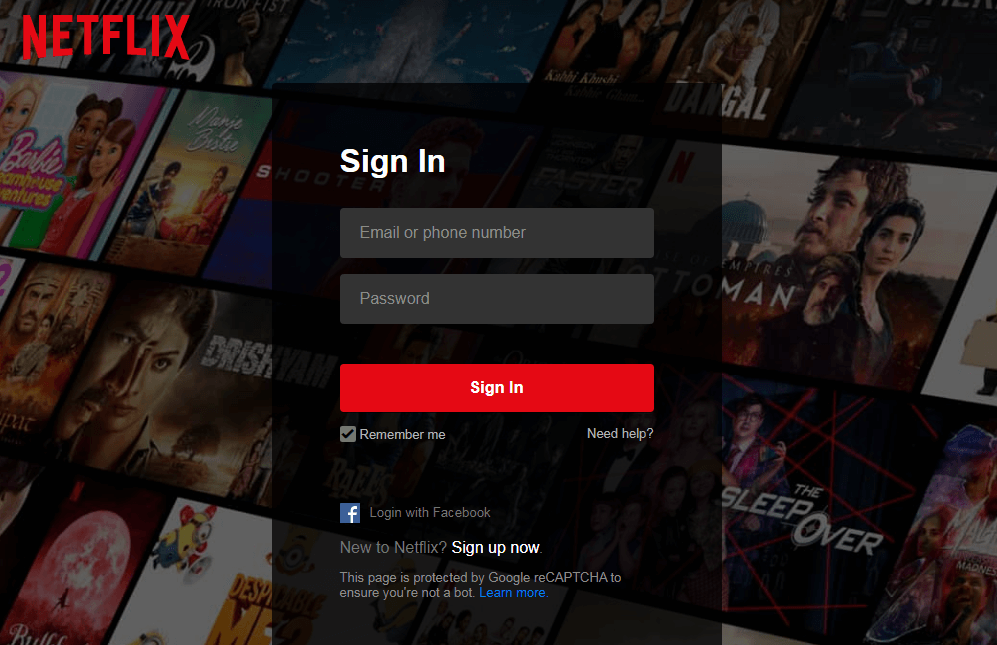 6) Start watching your favourite US Netflix shows and movies.

What’s the price of the cheapest Avast VPN plan?

Get Avast VPN for free for Netflix

If you’re not comfortable paying for an Avast VPN plan or would like to test the service first before committing to it, you can sign-up for a free Avast VPN trial. The Avast VPN free trial is available for sixty days and requires a credit card to register. The catch? If you do decide to make your subscription permanent, you’ll get charged an extra $20.11 on the yearly plan. However, if you cancel the trial before the end of the 60th day, you’ll be charged nothing. That means you can enjoy Netflix on Avast VPN for up to two months without spending a dollar on a VPN fee. 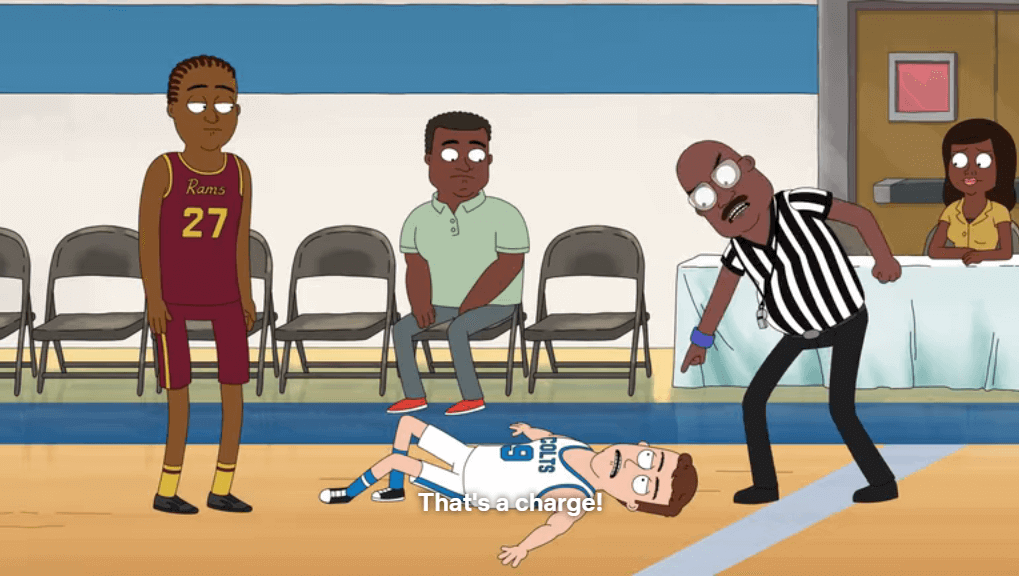 Watching Hoops on Netflix US

Do I need to get a US Netflix account to stream the USA library?

Here’s the best part, you don’t need to get a Netflix USA account to stream the regional US library. You can access US Netflix by using your current Netflix membership account, which can be from any country. The same applies to other region-locked catalogues as well.

Avast VPN operates sixteen servers in the United States, including three dedicated servers for streaming. These are located in New York, Miami, and Gotham City (virtual location).  You can access them via the streaming tab of your Avast VPN app. 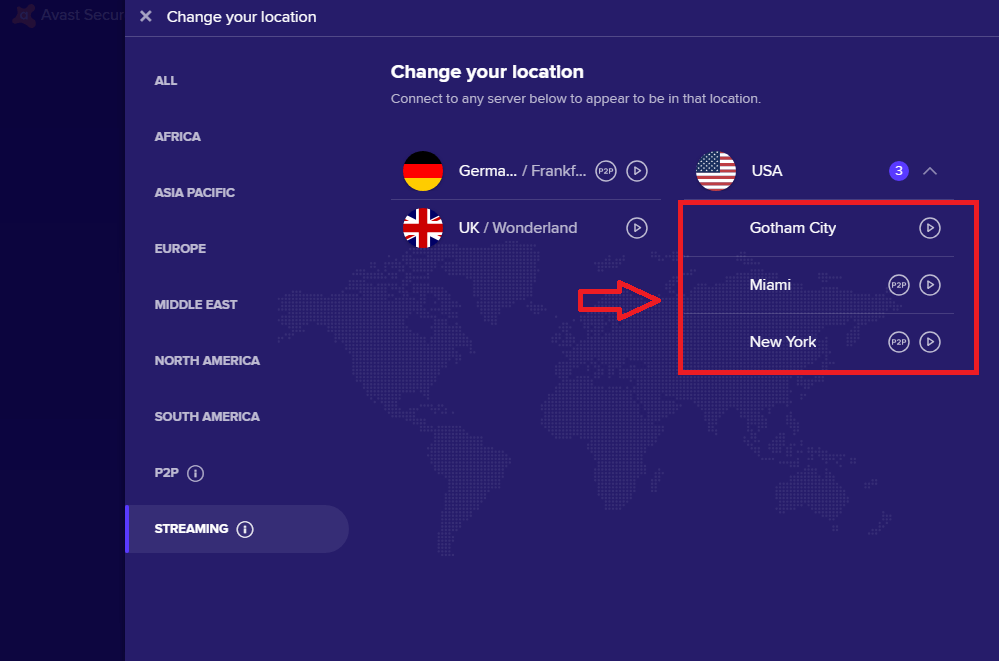 We tested the three servers and found the New York server by far the best among them in terms of both speed and reliability. The overall experience, however, was okay and not great. The Miami server was decent, while the Gotham City server failed to connect to Netflix altogether. Keep in mind, though, that Netflix and VPN servers have a cat-and-mouse relationship. A VPN server that works with Netflix today may not work with it tomorrow.

Although Avast VPN is slow compared to other premium VPNs on the market, its lack of speed doesn’t show up during streaming, thanks to Netflix’s reasonably accommodating bandwidth range.

Netflix runs even on a 0.5 Mbps connection. If you want to stream in HD quality, you need to have a minimum speed of 25Mbps. That’s easy to hit with any decent internet service.

We tested AvastVPN Netflix US servers for speed scores and found them averaging higher than 35Mbps. The results are summarized in the table below:

Other Netflix libraries you can unlock on Avast VPN

Besides unblocking Netflix US, Avast VPN also works with Netflix UK and Netflix Australia. The latter can be streamed by connecting to the Avast VPN Melbourne server, available under the main server list. For Netflix UK, the Wonderland server works best. It’s a virtual server. You can find it under the streaming tab. 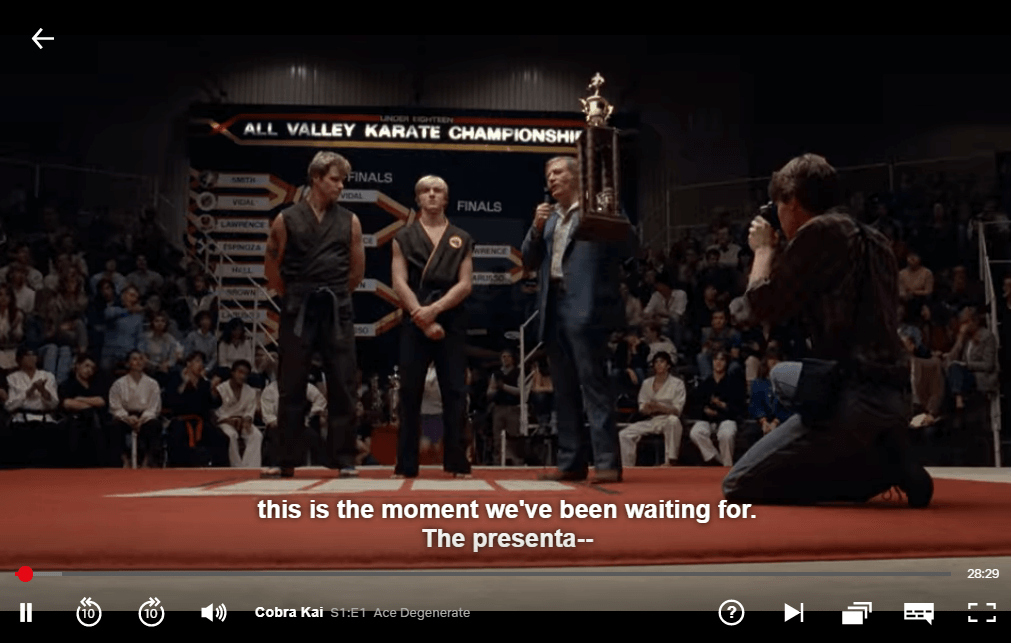 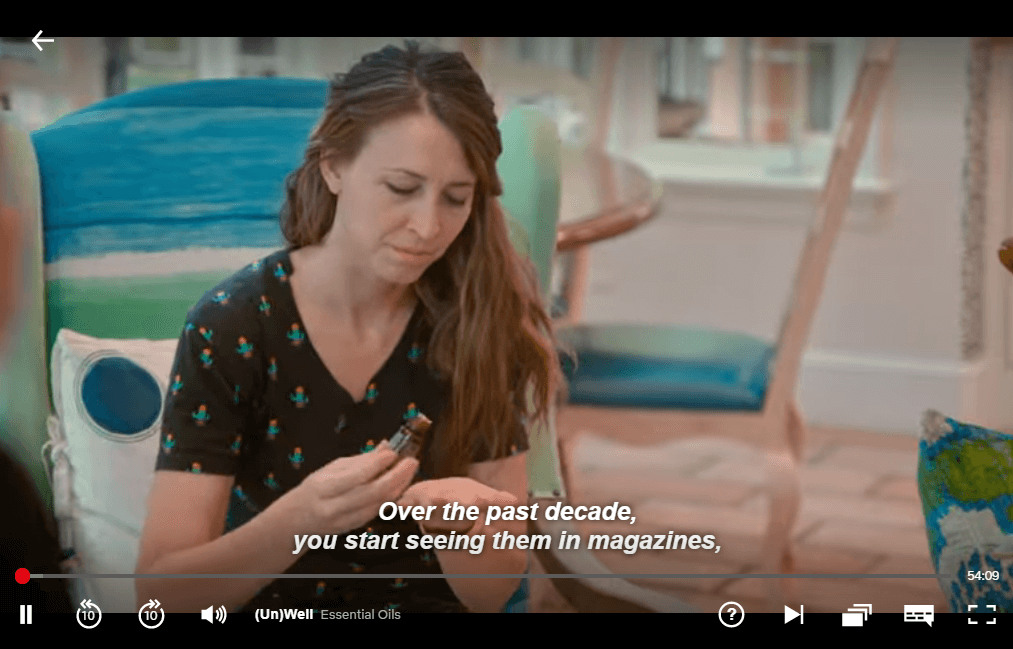 Ukraine and Azerbaijan have the highest rated Netflix content, with average IMDB scores of 7.13. Likewise, South Korea has got the biggest collection of award-winning shows and movies on Netflix. It features 109 Oscar-winning films and 35 Emmy Award-winning TV shows, the highest of any country. (Source: Surfshark). Unfortunately, Avast VPN doesn’t work in any of these countries.

If you’re unable to stream Netflix on Avast VPN, getting the Avast VPN Netflix proxy error, try one of the following fixes:

a) Clear your browser cache

App and browser caches can block your access to Netflix. Clear the caches and sign in again into your Netflix account and see if that works.

b) Turn off Real Site protection in Avast Internet Security

It could be possible that the server you’re trying to connect with on Netflix is under maintenance. Try changing the server, if possible.

Can you get banned for using a VPN on Netflix?

No, Netflix won’t ban you or cancel your account if it finds that you’ve used a VPN to access a region-blocked library. At most, it will block you on the server. So don’t need to worry about that.

Is Avast SecureLine VPN any good for Netflix?

Given there are only a few VPNs capable of unblocking Netflix, it would be unfair to completely undermine Avast. It’s a decent VPN to have as a backup, offering multiple servers for streaming Netflix. You can also use its free trial to get your daily Netflix fix when traveling abroad.

Will we recommend buying Avast VPN? Not really. You can find much better VPNs for about the same price (or even lower) that would give you access to more Netflix servers and libraries. In fact, we’ve listed a couple of them for your convenience below:

ExpressVPN: It’s the most dependable Netflix VPN, capable of unblocking catalogues in 20+ regions. It is fast, secure, and reliable. You can read more about the service here.

Surfshark: It’s the cheapest Netflix VPN, available for just $2.30 per month. However, don’t let its low price tag fool you. It has got fast, throttle-free Netflix servers and some absolutely amazing in-built security features that will keep you safe online. You can read more about the service here.

How to get Netflix for free for 30 days

You can get Netflix for free by signing up for the Netflix 30-day free trial. Please note, however, that the free trial offer is only available in limited countries. These include the US, South Korea, Switzerland, the Czech Republic, Austria, Portugal, Ukraine, and more.

Now that you know Avast VPN works with Netflix, how about checking our full Avast VPN review? We have a feeling you’re going to like it! Even we have compiled a list of the best VPNs for torrenting that help you quickly download your favorites hassle-free.

Also, have a look at these VPN-related articles. They may interest you: