CyberGhost VPN review summary: CyberGhost VPN is a well-balanced VPN service. It offers OpenVPN-enabled online security, AES-256 bit data encryption, 300+ specialized P2P servers, and impressive streaming support that lets you watch Netflix, Crunchyroll, BBC iPlayer, Hulu, and other major streaming services from Australia. It’s also reasonably fast, clocking an average speed of 15.36 Mbps on a 20 Mbps internet connection. You can use CyberGhost VPN with Windows, Mac, iOS, Android, and Linux devices. It can even be manually configured to run on your smart TV and gaming console. CyberGhost allows up to seven simultaneous connections and costs AU AU$3.36/mo (US$ 2.29/mo) only.

What Country is CyberGhost Based in?

CyberGhost VPN is based in Romania, a country that isn’t a part of the 14 eyes alliance. This country does not compel companies to share users’ information.

Romania is a part of the European Union, and it previously implemented the EU’s 2006 Data Retention Directive that regulated the data generated by companies.

But in 2009, the Constitutional Court of Romania (CCR) declared that the data retention law violated Romanian citizens’ right to privacy.

In 2011, the Romanian government was under pressure to re-enact the Directive but once again, the CCR declared it as unconstitutional.

Romania remains the only country in the European Union to have rejected the data retention law proposed by the EU not once but twice.

How Many Servers Does CyberGhost Have?

CyberGhost VPN has 6,300 servers in 89+ countries. These servers cover a total of 110 different locations.

In fact, when you open the CyberGhost app you will find that it tells you the load on each server so you can connect to the one that has a little load.

If you visit its websites, you can find the best server based on your preference. You can pick an activity such as Netflix US and it will let you know its best server for streaming Netflix.

Is CyberGhost Good for Torrenting? 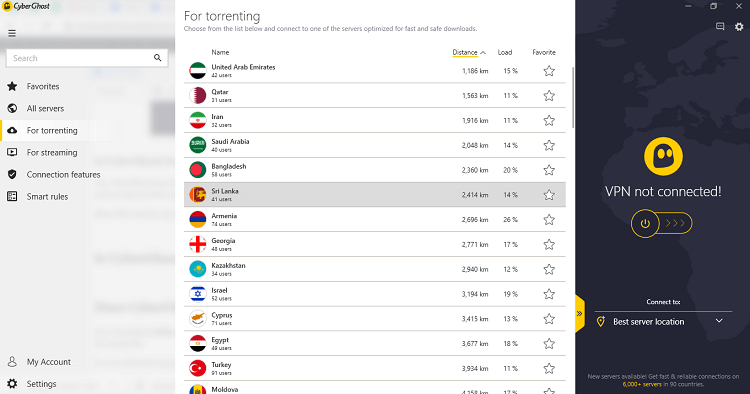 Is CyberGhost VPN Safe to Use?

CyberGhost VPN is completely safe to use as it uses the most advanced encryption, i.e. 256-bit military-grade encryption at all times.

Also, it supports several VPN protocols like OpenVPN, IKEv2, L2TP/IPSec, and the latest protocol WireGuard. The new protocol combines the tight security of OpenVPN and the fast speed of IKEv2.

CyberGhost hides your IP address and replaces it with the one from its server network. It easily spoofs your location and makes it impossible for websites to track your browsing activity.

Whenever you are connected to public Wi-Fi, it encrypts your traffic and protects it from snoopers. Your internet traffic passes through a VPN-encrypted tunnel that keeps your data private and completely anonymous.

Yes, CyberGhost hides your IP address, prevent any DNS leaks, and doesn’t have any viruses or malware attached to its download file.

It was confirmed using the test I performed for the IP/DNS leak and Virus test.

I connected to the Austrian server and checked for any IP leak using this website. It did not leak my original IP address. 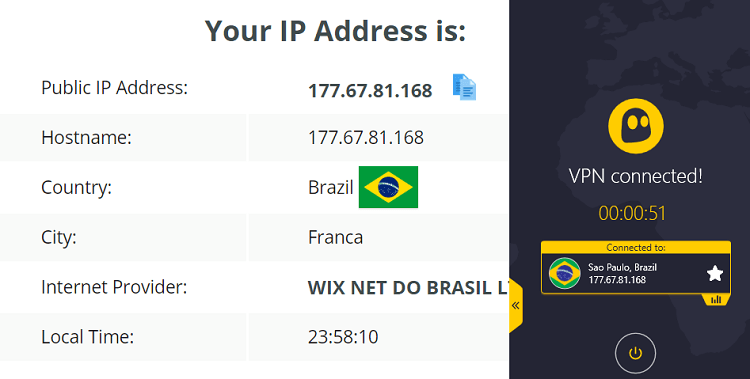 This test revealed that CyberGhost VPN does not leak any DNS Requests.

Virus Total did not find any viruses or malware on its Windows installation file. Here is the snapshot:

No, CyberGhost VPN does NOT store any connection logs nor does it store your activity logs. Even so, they do not have any access to your credit card information as well.

CyberGhost makes it very clear the type of information they do NOT store:

The only information they collect are:

This information is collected for the proper administration of user account and providing them with customer support.

Does CyberGhost Work with Netflix?

Yes, CyberGhost VPN works with Netflix and as well as other streaming services such as BBC iPlayer, Hulu, Stan, HBO, Crunchyroll, and more.

It is only able to unblock US Netflix, DE Netflix, and FR Netflix. I easily gained access to American Netflix with CyberGhost dedicated Netflix servers.

I tried watching Prison Song that is only available in the US library.

Here is the screenshot of me streaming Prison Song without any problem:

To be sure, I also tried connecting to BBC iPlayer to see if it works. I connected to its UK server and it worked perfectly to unblock BBC iPlayer. Here is the screenshot:

How Many Devices Does CyberGhost Support?

It also supports browser extensions like Chrome and Firefox as well. You can create your own custom connection within the Router as well. 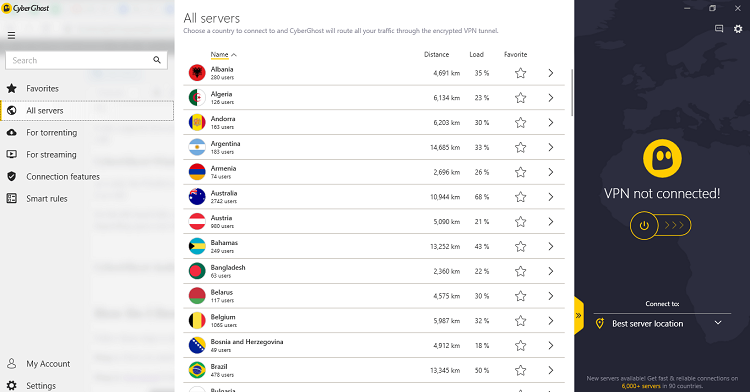 As I said, the Windows app is quite is easy to use. It has a small tab that could expand to a full Windows length app and you can minimize it as well.

On the left-hand side, you will find options like All Servers, For Torrenting, For Streaming, and more. Choose these options depending upon your choice of use.

You can experience the same kind of privacy and security features on CyberGhost’s Android and iOS apps.

Overall, the app performance is no different from its Windows counterpart. You can choose servers based on your needs like streaming or torrenting.

Follow these steps to download CyberGhost VPN on any device. I have used an example of a Windows app. 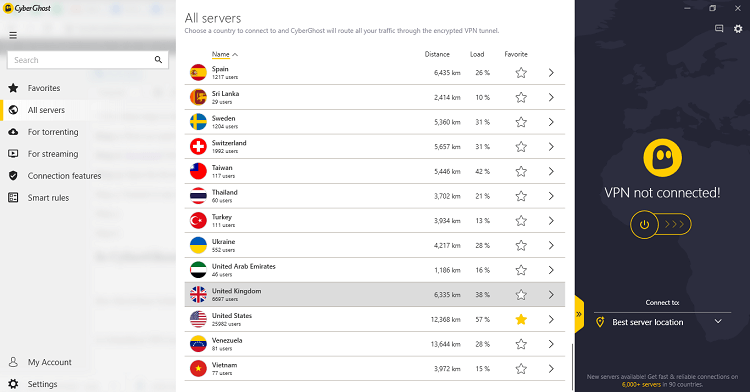 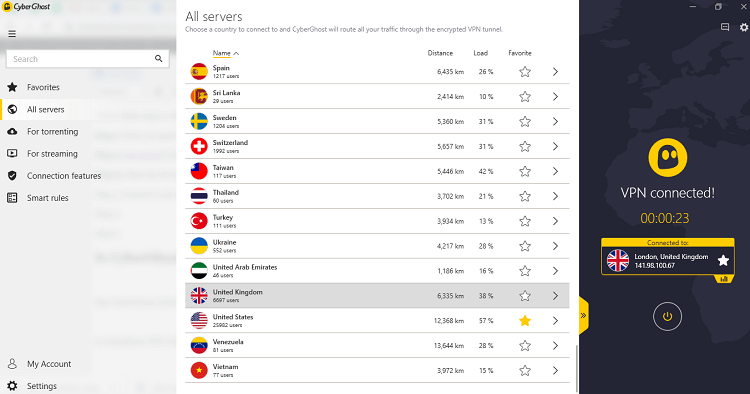 Yes, CyberGhost VPN is fast enough to stream any video without having any buffering issues.

To check its speed, I connected CyberGhost to 3 different servers i.e. US, Brazil, and Austria. My original speed without connecting to the internet was recorded at 20 Mbps.

By connecting to this server, my internet speed was decreased by only 23%.

By connecting to this server, my internet speed was decreased by only 19%.

By connecting to this server, my internet speed was decreased by only 15%.

How Much Does CyberGhost VPN Cost?

CyberGhost VPN has a very reasonable pricing plan. It also gives you a 1-day free trial on its Windows app to try out its services. All you need to do is provide your email address.

Have a look at its pricing plan:

The most reasonable is its 3 Years + 3 Months plan which helps you save 83%. It has also the most extraordinary refund policy as well. You can get a full refund within 45-days. Its 1 Month plan has only a 14-day refund policy.

You can find only 3 payment methods i.e. Credit Card, PayPal, and bitcoin which is not much. You can connect 7 multiple devices at the same time with a single CyberGhost account.

CyberGhost has a responsive customer support service. It has 24/7 live chat support that will cater to any problem you face.

Other than the live chat support, you can find other resources that may be useful to solve your problem. These are:

The only fact that I didn’t like was whenever the live chat windows appear, the first message you will see is they’re apologizing to users to hear they are canceling the subscription. Doesn’t make sense at all.

Do I Recommend CyberGhost VPN?

CyberGhost has an amazing easy-to-use app that has fast speed, supports torrenting, and easily unblocks American, French, and German Netflix.

I didn’t encounter any buffering issues and the fact that it gives you a 1-day free trial and a 45-day money-back guarantee is what makes this VPN so much likable.

The price is reasonable too and I didn’t find any IP or DNS leak as well which makes it completely safe to use. It has tons of servers so there’s no problem with connectivity as well.

But if you want to know about other VPN services, you can check out our list of best Australian VPNs.