What Is American Netflix Cost In Australia 2022? [Easy Guide] 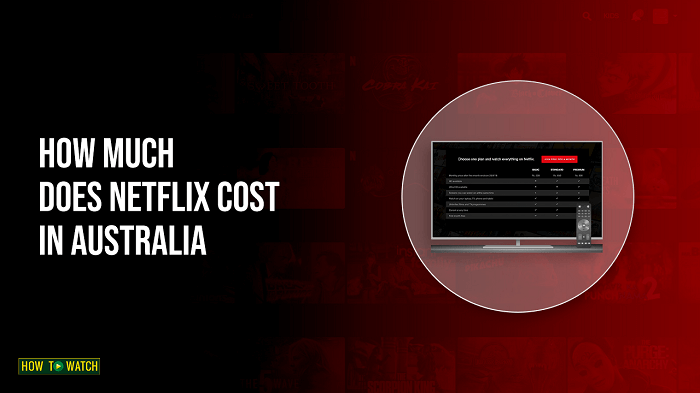 How much is Netflix per month in USA?

Netflix is arguably one of the most-watched streaming services in Australia that let you watch TV shows, movies, and documentaries based on various exciting genres. These genres include action, comedy, romance, suspense, drama, thriller, science-fiction, and many more.

If you are planning to subscribe to American Netflix in Australia, you will need a premium VPN like ExpressVPN as its is geo-blocked in Australia.

Continue reading this guide to know Netflix cost in Australia and how you can watch all your favorite TV shows and other media content under your budget.

Netflix Cost Australia: What are the Different Plans?

When we talk about Netflix cost in Australia; there are different streaming plans, depending on how much you’re willing to pay.

The cheapest plan is $10.99/month and allows you to watch standard-definition content on one device at a time. Besides, subscribers can avail its standard package by paying $16.99 per month. The said pricing plan enables them to watch media content on two devices simultaneously in HD quality.

Additionally, the most expensive plan is $22.99/month and allows you to watch HD content on four different devices at the same time.

How Does Netflix Pricing Compare to Other Streaming Services?

Netflix stands out from other streaming services by offering a variety of attractive features like its own exclusive programming and a wide selection of movies and TV shows. Apart from this, you can enjoy other stunning features on numerous devices like multiple profiles, offline viewing, etc. accordingly.

Compared to other popular streaming services like Stan and Amazon Prime Video, Netflix’s monthly cost for Standard HD service is expensive. Stan charges $10 per month for its Basic plan, $14 for its Standard plan, and $19 for its Premium plan, while Amazon Prime Video charges $6.99 per month.

Netflix does offer a cheaper monthly price for its Standard plan if users are willing to forgo high-definition video quality. Still, it is higher than other streaming services like Shudder and Britbox. Likewise, Binge is another impressive streaming service ideal for watching popular TV shows like Westworld, Game of Thrones, The Walking Dead, etc.

Fortunately, you can subscribe to its Basic plan by paying $10 per month and watch your favorite media content on different devices. Prime Video is one of the most affordable streaming services in Australia that allow you to watch some exclusive TV shows as per your preferences. However, Netflix still holds the edge over all these video-on-demand platforms mentioned above in terms of content quality and additional features.

Lastly, it does not matter which Netflix pricing package you opt for because you can upgrade, downgrade or cancel your package anytime trouble-free.

Which Netflix Australia Plan is Best for You?

Netflix Australia pricing begins at $10.99 per month. Likewise, viewers can get its Standard package at the cost of $16.99 per month, allowing them to stream media content in HD quality. The premium plan is ideal for fans who want to watch TV shows and movies on four devices at a time in UHD (Ultra High Definition) quality.

In short, the above-explained packages help you to accomplish your Netflix in Australia streaming craving alongside your loved ones perfectly.

Does Netflix have a free trial?

Netflix free trial no longer exist. Previously, the streaming giant used to provide a generous 30-day free trial to its users. But sadly, this is not the case any longer. Netflix removed free trial from its armory in March 2020. That said, you can change or cancel its plans anytime, depending on your budget and other preferences.

Netflix has been a staple in many households for years, with its library of movies and TV shows available at the touch of a button. However, recent reports suggest that the streaming giant is starting to crack down on account sharing.

Netflix has traditionally been a very relaxed company regarding account sharing. Up until now, there have been no restrictions on how many devices can be used to watch Netflix simultaneously. But surprisingly, this policy appears to be changing, as the company has announced that it will start blocking users who share accounts illegally.

Netflix says that password sharing is against its terms of service and is taking steps to prevent it. However, as per CEO Reed Hastings, “password sharing is something you have to learn to live with.” This statement gives a lot of breathing space to customers who want to subscribe to this service in the future for their families.

Above all, you can try out a VPN service to access the media content library of American Netflix in Australia using your same Netflix Australia credentials without any problem.

What else do I need to know about Netflix?

Netflix is a US-based entertainment company founded on August 29, 1997, in Scotts Valley, California. The media streaming leader started its services in Australia on March 24, 2015. As far as Netflix data consumption is concerned, viewers who stream content in SD (Standard Definition) quality will consume their 1 GB of data per hour.

Likewise, Netflix does consume 3 GB of data per hour if users watch content in HD (High Definition) quality. Furthermore, you can stream Netflix content with download speeds of 0.5 Mbps in lower quality.

If you are willing to stream shows or movies in UHD (Ultra High Definition) quality, you will need to connect to an internet connection that offers 25 Mbps download speeds.

How much does Netflix cost?

Netflix costs $10.99 to $22.99 per month in Australia. Luckily, you can watch Netflix on desktops, mobile phones, tablets, and other devices.

Netflix has already increased pricing for its basic and standard packages in November 2021. It means the service will not increase its price in the near future. That said, Netflix has raised its pricing plans for American and Canadian subscribers.

What is the difference between Netflix basic standard and premium?

The basic plan only offers media content in SD quality. However, the premium plan allows you to watch TV shows and movies in HD and Ultra HD quality. The standard package lets you stream media content on two devices at a time. But, you cannot enjoy the simultaneous streams feature on the basic plan.

We hope now you know Netflix cost in Australia after reading this guide. US Netflix allows you to watch documentaries, shows, and movies hassle-free.