Windscribe VPN  is the true meaning of browsing the web privately as it was meant to be. It entices users’ with an amazing free version having 10 GB data limit each month.

Usually, people stay away from free VPNs as they’re known for selling your information. But in this review, we found Windsribe to be the exact opposite.

Having servers in more than 63 countries and embedded with features like R.O.B.E.R.T that block IPs and Domains of your choice makes it a reasonable option for people looking for a high-speed VPN with advanced security.

In this review, we’ll be discussing all Windscribe VPN service, their security features, speed, logging policies, devices it supports, and pricing (premium plan).

Is Windscribe Located in a Safe Jurisdiction?

Windscribe is located in an unsafe jurisdiction i.e. Canada. Since Canada is a member of the 5-eyes alliance, it has the authority to share the personal data and intelligence of its citizens with other countries.

National security is above everything. If the Candian authorities think they need the personal information of Windscribe users’, it would force them to give away your information.

Even though Windscribe claims that it does not log users’ data, it would still have to prove by sharing its logs.

How Many Servers Does Windscribe Have?

Windscribe VPN has servers in 63 countries on its premium plan. If you’re using it for free, then you only get 23 servers to use in 11 countries.

It even has servers in UAE, Hong Kong, Russia, and Ukraine that are rarely available in other VPN services.

Is Windscribe a Good VPN for Torrenting?

Yes! All of Windscribe servers are P2P supported except the ones where it specifically mentioned ‘No Sharing Allowed’.

Windscribe VPN torrenting servers will allow safe P2P sharing without being seen by your ISP or the Government. Windscribe is a dependable VPN that does not fully fall for the best torrenting VPNs like ExpressVPN.

Windscribe VPN is completely safe to use. Windscribe protects your data with the strongest encryption i.e. AES-256 Cipher with SHA512 auth and a 4096-bit RSA Key.

They also use perfect forward secrecy that automatically changes the key that makes it impossible for an outsider to decrypt information.

In their browser extension, Windscribe uses TLS 1.2 ECDHE_RSA with a P-256 key exchange which is pretty hardcore.

Here are some of the additional security features offered by Windscribe:

R.O.B.E.R.T: This is an important feature that allows you to block IPs and domains (ads) of your choice. For example, if you wish to block gambling websites it will block any website related to gambling.

Static IPs: These are the regular IP address available on Windscribe standard servers. The only difference is, everything time you connect to the same external IP.

Split Tunnelling: It allows you to handpick which websites or apps go over the VPNs and which don’t.

Ad Blocking: Windscribe also has a feature to block ads successfully over the internet. It identifies and blocks trackers as well.

Double Hop: This feature will offer an additional layer to your online protection by connecting to two different servers before you reach your final destination on the web.

Does Windscribe Hide Your IP?

Yes, Windscribe VPN is free from any IP or DNS leaks. It hides your IP so that your web browsing history cannot be tracked.

Have a look at the screenshots of IP, DNS, and Virus test:

I connected to the new Turkish server that is available in its free plan. It did not leak my original IP address.

The standard DNS test revealed that it does not leak any DNS requests.

Virus Total could not find any virus inside its Windows installation file. Here is the test screenshot:

Windscribe is a strictly ‘No-Logs VPN’ and that is why they don’t keep any logs. In fact, they have a firm belief that one’s browsing history should be taken to one’s grave.

To be precise, Windscribe does not keep activity logs but it does in fact keep connection logs.

The following data is NOT stored by Windscribe (Activity Logs):

The following data is stored by Windscribe (Connection Logs):

The data transferred is stored because it helps Windscribe to determine the 10 GB data limit used by Windscribe users’ from their free account.

Does Windscribe Sell Your Data?

Windscribe VPN does not sell your data to third parties or any other concerned authority. They do not store your personal information other than your username.

VPNs that store your internet browsing history or the ones that track your data are mostly free VPNs.

Since they’re free, they would sell your data to advertisers who would then market tailor-made ads related to your browsing history. To avoid such VPNs, you might want to read our guide on the best free VPNs Australia.

Does Windscribe Work with Netflix or Other Services?

Yes, Windscribe unblocks different Netflix libraries, including the US, UK, Canada, and Japan. The Windscribe Netflix servers can be found in the standard server list. However, they are only available for access to paid users.

To verify if their service works with Netflix, I connected to Windflix JP for Japan Netflix, and it worked perfectly fine. Here are some more top-rated VPNs that unblock Netflix.

Windscribe VPN was also able to unblock Hulu, Disney Plus(For those who aren’t satisfied with their region’s library of Disney Plus), and BBC iPlayer content that is only available in the UK. Here is the screenshot for the BBC iPlayer.

How Many Devices Does Windscribe Support?

It also supports browser extensions such as Chrome and Firefox.

The Windscribe app for Windows is quite compact and is really simple to use. If you look at the below image, you will find the list of country servers you can connect to.

Each of those servers indicates the speed or ping that let you know which server has the fast speed.

The big circle button will help you Turn ON or Disconnect the server. 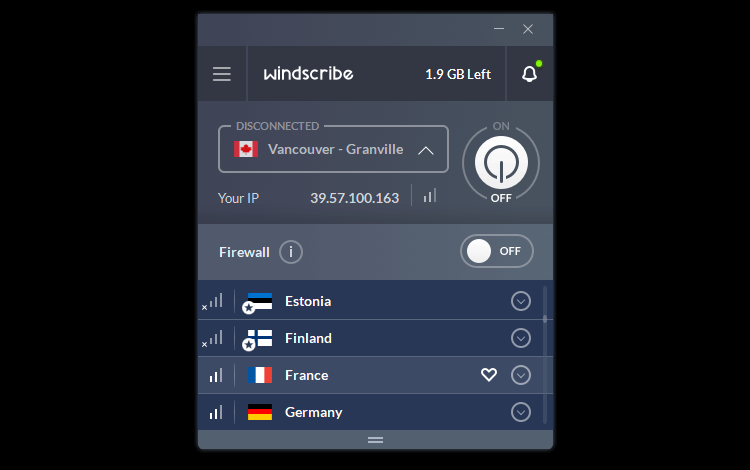 The iOS app for Windscribe is even easier to use than the Windows app. Any country you choose from the list will open its servers.

Once you choose the server, just press the button at the top to Turn ON VPN security. 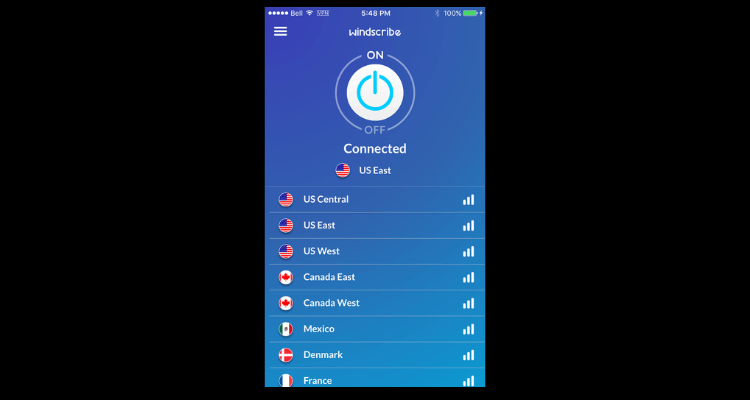 I really like its Android app because of its interface. It is really soothing to the eyes and the fact that it uses each country’s flags in the background is what makes it great. 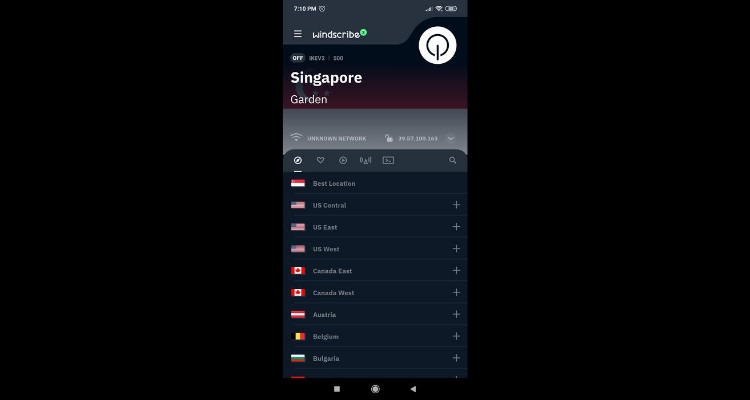 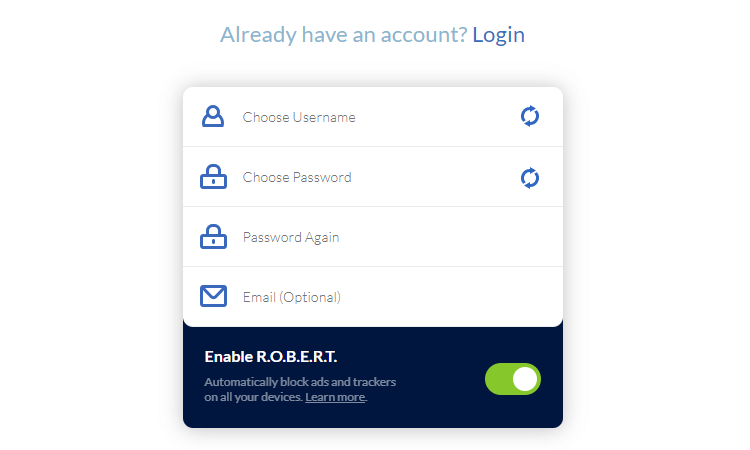 Step 3: Open the app and enter the Username/Password 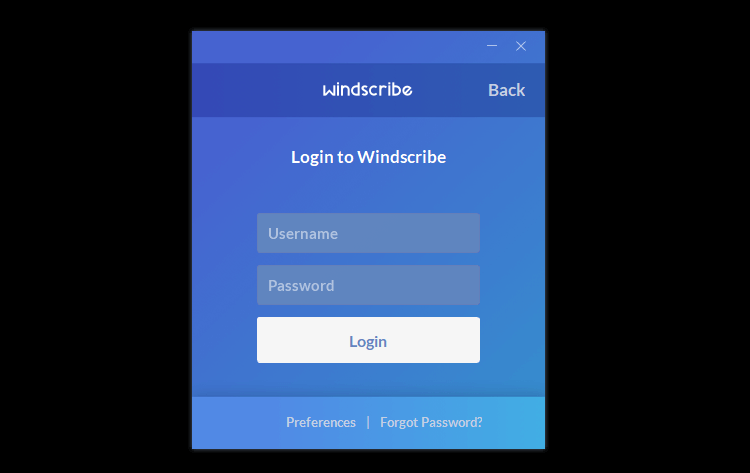 Step 4: Connect to any server 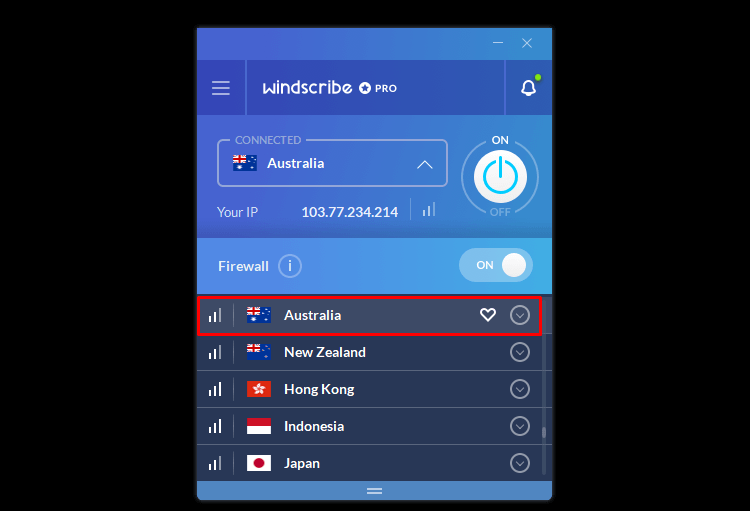 Step 5: Once connected, start browsing safely on the internet

How Fast is Windscribe VPN?

Whether you’re streaming, browsing, online gaming, or doing anything on the internet, you will find Windscribe to be fast.

My original speed was recorded 20 Mbps. Here are the test speed with screenshots.

By connecting to this server, the speed decreased by 40% which is just above average.

By connecting to this server, the speed decreased by just 29% which is good.

By connecting to this server, the speed only decreased by 18% which makes it really fast.

How Much Does Windscribe Cost?

Windscribe VPN has a free and a premium plan. The free plan is for those who are light users. It offers up to 2 GB of data per month without providing your email address. But if you confirm your email, it gives you a data limit of 10 GB/month.

Following are the pricing plans: 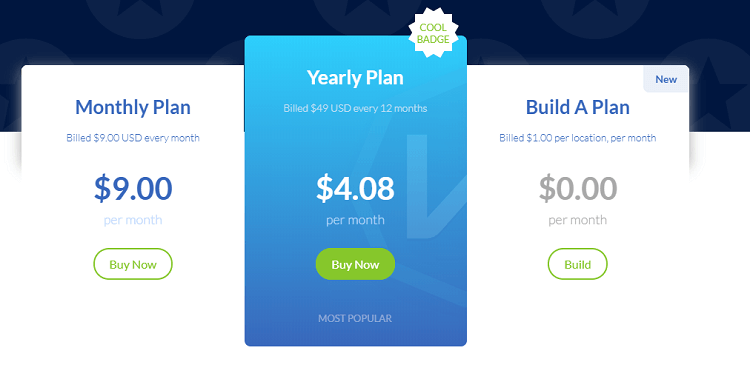 In its free plan, you get to use 11 different locations with Turkey been recently added to the free servers.

When the Windscribe premium plan is concerned, the pricing is set relatively higher than CyberGhost or Avast VPN. But it very well neutralized it with a free plan.

You can also build a custom pricing plan through Windscribe Build a Plan. Choose the servers that you want to induct into your plan and pay $1 per location.

You won’t be able to receive a Windscribe refund if you have used the service for more than 3 days or if the data that exceeds 10 GB. You can reimburse within 30 days of the request.

You can purchase Winscribe with many different payment options such as bitcoin, PayPal, VISA, MasterCard, American Express, and Paymentwall.

As you can see the payment methods are few. You don’t see Ali Pay, Skrill, Mint, etc. Also, bitcoin payments are non-refundable in any case.

So play safe and try to use its free plan before committing to its premium plan.

Windscribe customer support team is quick to respond to your queries or any technical problems you encounter.

Windscribe will help you solve the problem in six different ways. These options include:

I really liked ‘Talk to Garry’ support which is actually a Robot Live Chat that will help you find solutions to your problems within seconds.

But at times it could be quite foolish. When that happens, make sure you just submit a ticket and they will reply to you within 24 hours. 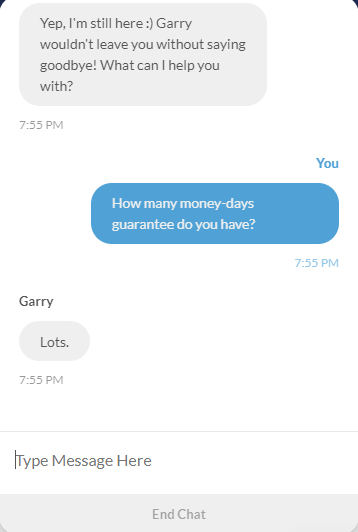 Should You Buy Windscribe?

Yes! You should buy Windscribe VPN because it has fast speed, doesn’t leak IP or DNS, and most importantly it has the strongest encryption available.

The fact that it is based in Canada (a 5 eyes country), it doesn’t happen to keep logs. Even if the authorities ask for your data, the company wouldn’t have anything to give.

The best thing I liked about Windscribe is its free plan. You can use Windscribe’s 10 GB data while signing up with your email. You can test out the service before you buy it.

Performing this Windscribe VPN review, I also found that it will unblock Netflix, Hulu, and iPlayer for you as well. It makes it a perfect overall VPN and is available for all devices.

f you ask me if Windscribe is a good VPN, I would always recommend you to buy it due to all the qualities I just listed here, but it certainly doesn’t beat the likes of NordVPN or Surfshark, which are VPNs with free trials.

If you’d like to know about more VPN services and seek which VPN would be right for you, read our guide on the best VPNs for Australia.